The straws were developed in South Korea and are made from just two ingredients. They biodegrade in about 100 days. 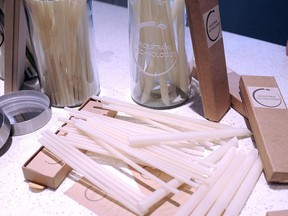 As the City of Vancouver considers delaying its ban on single-use consumer items, a local company believes that straws made from rice and tapioca could help reduce plastic use.

Rice straws were first developed by Yeonjigonji, a South Korea-based company, and after a year and a half of research, development and trials they hit the market last August. They are being used in cafes, department stores and hotels in the country.

“We know we have a plastic problem and we know it isn’t going to end with just straws,” said company spokesperson Din (Sharon) Dinh. “But by shifting over doing one good thing for our environment, we can create awareness and push people to other environmentally friendly behaviours.”

Vancouver had planned to institute a ban on plastic straws, plastic and paper shopping bags, disposable cups, takeout food containers and plastic utensils on June 1. However, staff are expected on Wednesday to ask for an extension  to January 2020 for foam cups and takeout containers, and April 2020 for plastic straws. This would allow small businesses to come up with alternatives.

Staff are also recommending that the city ask the province to adopt a more comprehensive single-use, item-reduction strategy and develop standards for single-use items. The city found that compostable plastics don’t break down easily when left on the ground or in water, and can be hard to dispose of. 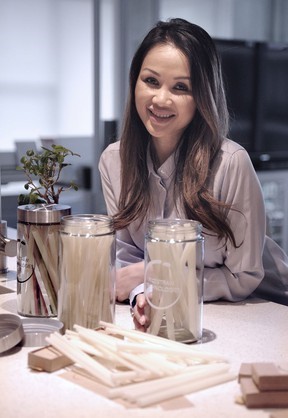 Dinh said that is not an issue with rice straws, which are made from equal parts rice — the majority of which otherwise would have been wasted — and tapioca. They are made with no additives and have no taste. Dinh said they break down in about 100 days, and can even be cooked and eaten.

In cold liquids, the straws maintain their shape for three to four hours. In hot liquids, they last one to two hours. This is an improvement on paper straws, which can quickly become soggy. It also negates the need to travel with your own reusable straw.

“There are a lot of alternatives there on the market, but we find that rice straws is something we 100-per-cent support because it’s completely natural,” Dinh said.

The company sells basic and wide straws — the type used for bubble tea — as well as stir sticks. Rice bags, single-use cutlery and “slush straws” are in the works.

The straws cost about five cents apiece — it varies depending on volume and other factors — compared to a penny for plastic.

“We are very competitive compared to the other eco-friendly alternatives now,” she said.

Rice Straw Technologies was founded in January. Dinh said the company already has some local contracts, and has sold out of their first container of four million straws.

Chris Woodburn, the food and beverage director at Predator Ridge Resort in Vernon, said the resort’s restaurants started using the straws about three weeks ago. Generally, straws are not provided unless requested by a customer, who will receive a rice straw.

Woodburn said he was skeptical at first, but the product performs as advertised. The resort composts used straws, and Woodburn said they begin to break down within days.

“Their product is really quite spectacular,” Woodburn said.

Guu Davie, the newest restaurant in the local Guu chain of Japanese eateries, has also tested the straws, according to spokesperson Yasumi Yajima. Although the restaurant doesn’t usually provide straws, it offered rice straws when asked. Yajima said the manager reported that the straws held up better than paper and there was no negative feedback from customers.

Peter DeBruyn, provincial chair of the B.C. Restaurant and Food Services Association, said the industry is actively working with local governments on single-use item bans and bylaws. He said the idea of rice straws — and other alternatives to plastic — is worth investigating.

“The timing is great,” he said.

In considering a plastic straw ban, Vancouver is following the lead of other major cities, including Seattle, New York, San Francisco and Los Angeles.

Seattle banned single-use plastic straws and utensils in food service last summer and mandated that restaurants use compostable utensils, straws and cocktail picks. The city is also encouraging offering no straws at all or using paper straws over compostable plastic.

An ordinance in the city of Los Angeles went into effect on Monday, prohibiting restaurants from offering or providing disposable plastic straws, however, patrons can request them. San Francisco’s ban is expected to go into effect in July.

The rice straws is being sold at Safimex company. If you are interested in this items, please refer our product at https://www.alibaba.com/product-detail/Flour-Rice-Drinking-Straw-Rice-edible_1600075078343.html?spm=a2747.manage.0.0.52fb2c3cwmrnob