This is my (very similar) take on goldenbacon’s coconut shell bowl tutorial, the main differences being that I used waterproofing lacquer I made myself rather than a spray-on waterproofer, and that I went into far more detail about each of the steps. I also adapted a trick for getting the meat out of the coconut more easily.

This project was completed for an art class, but I hope everybody can get some use out of it!

Here is a list of the materials you will need:

For the bowl itself:

The first task will be to punch a hole through the outside of the coconut to drain the fluid from inside of it. Initially, I tried to hammer the nail directly into the top of the coconut; where it had joined to its stem. As far as I can tell, this is impossible. Instead, I recommend placing the nail slightly to the side of the top of the coconut; where the shell is less dense. Depending on the width of the nail; the initial hole might not be large enough to drain more than a trickle of fluid; I ended up making three holes close to one another, and then breaking down the shell in between to create one large hole.

Once you’ve made a hole, place the coconut, drainage hole down, over a container whose mouth should be smaller than the circumfrence of the coconut. You can leave it to drain on its own; but I recommend shaking it from time to time to move the process along. You will know the coconut is completely drained when fluid stops trickling out; and when the coconut no longer makes a sloshing noise when you shake it.

The next step is to draw a line with your marker around the circumfrence of the coconut; either dividing it in half or at whatever proportions you prefer your bowl to be. Remember that the half with the hole in it will be unusable as a bowl, and should probably be the more shallow of the two halves. To get an even line, I recommend standing a ruler on its end, with the coconut on a flat surface; and making a series of marks at the same height, then connecting these with a solid line. 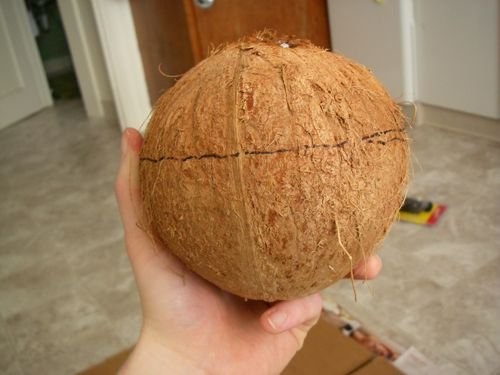 When sawing along the guideline you’ve marked, I find the most effective way to get an even cut is not to saw all the way around the shell; but to pick one spot and work in deeper from there. My saw was fairly dull; so it worked much better to cut a narrow groove and then saw straight through from that point, using the guideline to keep the saw even. This step should take about ten or fifteen minutes; depending on how strong you are (and how sharp your saw is).

Once you have the two halves separated, a good trick I read for loosening up the meat of the coconut for removal is to pop the bowl-half into the microwave. Two minutes should be sufficient; it will be quite hot when you take it out, so use caution, and give it a few minutes to cool down again before proceeding to the next step.

To remove the meat, the original tutorial I found suggested the use of a chisel, but I found that after microwaving, a spoon worked equally well. The way to accomplish this is to score across the diameter of the fruit with your box knife, creating pie slice-shaped sections. You can then wedge the tip of your spoon between these and the shell of the nut, and pry them loose in more or less whole chunks. Ideally, the membrane between the meat and the shell will come off with them, leaving the inside of the shell bare; it should have a rough texture and look like tightly-packed plant matter.

Step 4: Sand Out the Shell. 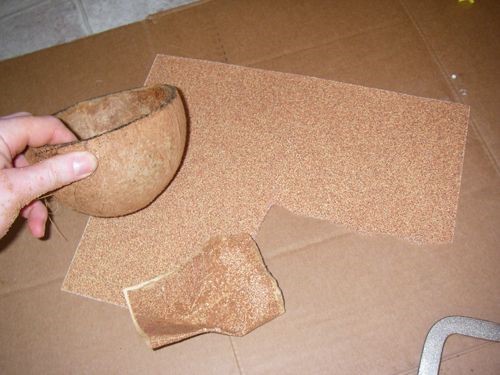 To finish off the texture and prepare the bowl for lacquering/waterproofing, take a 6×7 rough-grain sheet of sandpaper and tear it into quarters; then fold one of these smaller sheets double. Sand down the inside of the bowl until it feels smooth and there are no loose bits of coconut “hair” when you run your fingers over the inside. Do similarly with the outside; which will take more time and require a second sheet of sandpaper; since there is a lot more “fuzz” to remove. I would suggest also sanding down the rim of your bowl; since you might want to drink from it later! 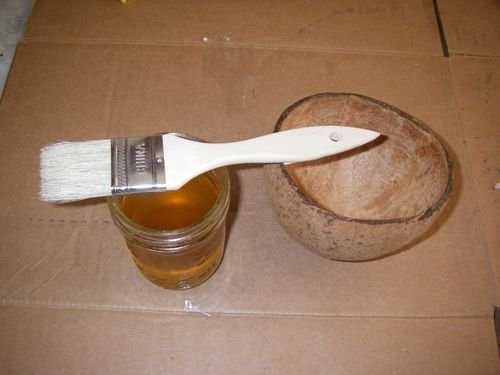 This step is optional, depending on whether your bowl is intended to be decorative or functional; but in either case I think the lacquering step makes it look much nicer and has a similar effect to “staining” the wood. Here you will mix one part linseed oil with two parts mineral spirits. One cup of the solution should be several times the amount you’ll need; I was doing this by ear and ended up making much more than was ultimately necessary. You should be able to get by even with just a third of a cup.

Using a 1 ½-inch paintbrush, coat the entirety of the inside and outside of the bowl with the linseed oil solution. For full waterproofing, I would suggest five or six coats, possibly more. Drying time for each coat could take anywhere from half an hour to two hours, depending on humidity; I used a hair dryer to speed the process up, to no ill effects. Each coat should be applied once the previous one has dried.

You can buy eco-friendly coconut shell bowl at Safimex with high quality and competitive price for export. Please feel free to contact us for more details.